Five star review of Out Of Bounds by Val McDermid 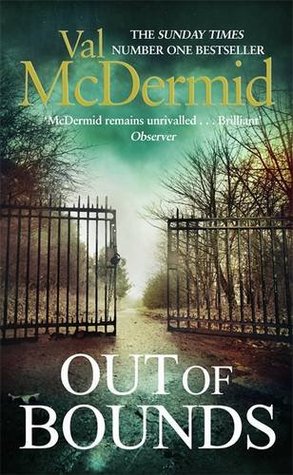 A chilling mystery told with compassion and wit, and a central character I feel I know like a best friend.

Cold case detective, Karen Pirie, the central character in Out Of Bounds, is a beautifully flawed, compassionate, ballsy, obsessive, lonely character. Even when times are tough for her, she can be generous to those in trouble, including her less-than-bright side-kick, and a group of Syrian refugees. In fact I love how subtly McDermid weaves into the narrative the contentious issue of what happens to refugees as they are being processed for asylum.

Pirie finds herself trying to solve not one, but three cases: the rape and murder of Tina McDonald twenty-odd years ago, a current suicide which she believes is murder, and a bombing of a light aircraft twenty-two years ago for which the IRA was blamed. And McDermid weaves theses plots together brilliantly.

I remember watching a YouTube interview of Val McDermid by Peter James in which she was asked, ‘What is the question you least like being asked?’ Her reply was, ‘How do I come up with my ideas.’ With over thirty published books to her name, there is no doubt that the wonderful McDermid has no shortage of ideas for great stories and continues to captivate our hearts and imaginations.