My battle with the Drake Passage

Thought I would share this write up on the total travel website about my time crossing the Drake Passage to Antarctica:

The British thriller writer was travelling in an ex-Russian oceanographic research vessel that corkscrewed in the wild seas.

Although the stoic Russian crew didn’t bat an eyelid at the conditions, Larkin and her fellow passengers were ordered to their rooms.

“All the outer doors had to be shut because you’d be thrown overboard,” Larkin tells AAP.

“Everyone was told to go into their cabins and lie on their bunks and hang on, stay there.

Larkin laughs at the memory.

“It is like being in a washing machine and you do need prescription-quality seasickness pills,” she adds.

Larkin, who lives in Sydney, was on her way to Antarctica as part of research for her latest novel, Thirst.

She spent three weeks travelling on the research vessel and describes it as brilliant and no bigger than a Russian trawler.

It was far from glamorous, she says, with a shower room like a cupboard and the shower head a hose.

“But because the ship is small, you can get in and out of all sorts of interesting places,” she says.

The author travelled from Ushuaia, at the foot of Argentina, so as to spend the shortest amount of time at sea.

“Drake Passage is notorious,” she reconfirms. “When people say it’s one of the roughest seas in the world they are not underestimating it.”

The crossing experience, she says, depends on the weather, which is difficult to predict.

“We were very lucky,” says Larkin.

“When you come out of the other end (of the passage) there’s this eerie silence and you look out and the seas are inky black.”

Larkin and her fellow passengers and crew advanced down the Antarctic peninsula, which she describes as like the tail of a stingray.

The peninsula is also the warmest part of Antarctica, she says, and has an abundance of wildlife, stunning glaciers and breathtaking scenery.

Antarctica, Larkin adds, is almost twice the size of Australia.

“A lot of people don’t realise how enormous it is and that’s without the sea ice. In winter, the sea ice doubles it in size.”

Larkin spent about a year, on and off, researching for Thirst, during which time she learned about crevasse rescue and polar medicine so she could describe, for example, the impact of hypothermia.

She kept a diary of her experiences and is publishing extracts on her website – www.lalarkin.com.

Larkin also spent time with the Australian Antarctic Division in Tasmania and the British Antarctic Survey in Cambridge.

This extra research was needed due to the location of the story.

“Antarctica itself is remote; very difficult to get to,” she says, “but everything else pales into insignificance in comparison with Pine Island Glacier, which is where I’ve set this.

“There are probably only a handful of scientists in the whole world who have been there.”

Larkin chose to set Thirst in Antarctica for a few reasons.

She sought a location where the central character, an Australian glaciologist, would be isolated and under pressure.

She also had a personal fascination with the continent and says it was the only place such a story, which revolves around a potential global catastrophe, could occur.

“It’s also an incredibly fascinating, savage, alien environment within which to tell a story.

“I think almost everyone I’ve spoken to has got questions about Antarctica.”

Having described herself as having an adventurous soul, it seems only fitting that Larkin is already writing two more Antarctic thrillers.

Thirst by LA Larkin is published by Murdoch Books, rrp $32.99 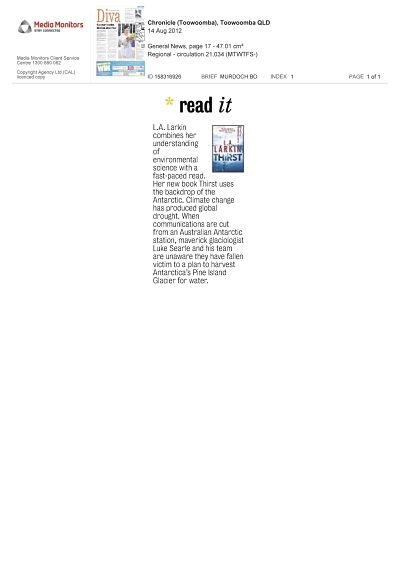 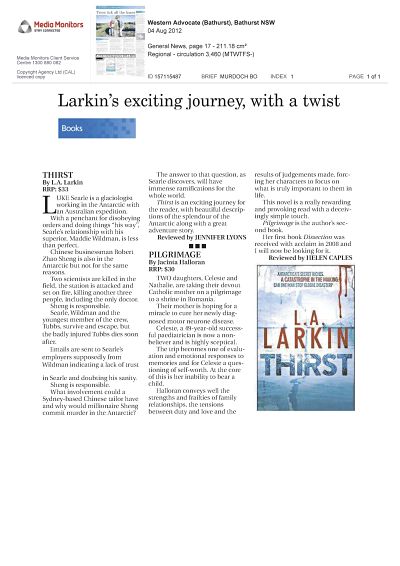